Blues was definitely born in the Sahara Desert, as the people who listen to the whistling winds graze the sands under the starry skies are some of the best musicians anywhere in the world. From their melodies and instruments such as the Ngoni came Blues and Jazz after African were violently littered all around the world. Yet the root of the sound is still very visible among the over 300 ethnic groups that inhabit West Africa’s music nursery whose sound, be it Wassoulou, Desert Rock or Blues or Afro Pop is heavy with emotion and ripe with rhythm of life. However, since the rise of militant radical Islam which led to occupation of parts of the north of the country in 2012, the nursery of fresh rhythms is muted under oppression. 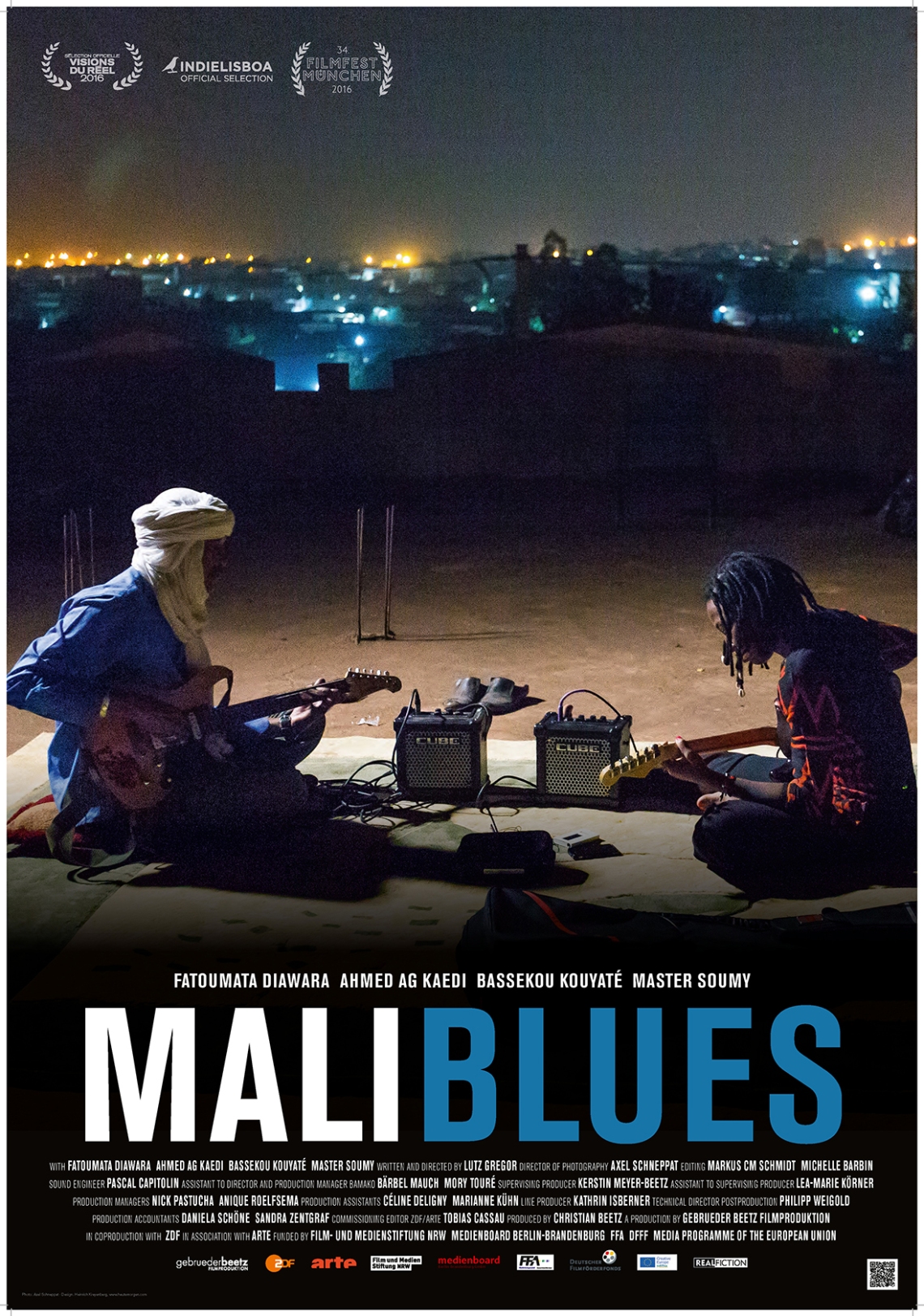 Mali Blues by Lutz Gregor, explores the interplay of life and music in Mali, by investigating the conflict and resistance to the premeditated murder of music. The documentary film released in 2017 via gebrueder beetz filmproduktion and Icarus Films follows four Malian musicians from different parts of the country, all on a journey to reinstate music into the soul of the nation. Since the conflict in 2012, listening or playing music has been considered forbidden and banned in regions governed by Jihadis who insist on strictly observance of Islamic Law. Indeed, Abderrahmane Sissako’ s critically acclaimed Timbuktu, fictionalized this part of Mali’s recent history in a scene where a character played by Fatoumata Diawarra and other musicians are punished for playing music at night.

Fatoumata reprises her role in real life this time along with Bassekou Kouyaté, Master Soumy and Ahmed ag Kaedi who collaboratively work towards spreading a message of peace through their music. Their resistance and unity resonates on-screen as they work tireless towards a renaissance of the mentality of Malians. Each of them, however is motivated by a different reason yet they all seek to achieve the same thing, peace in Mail. Ahmed Ag Kaedi sings to remind himself of his home, Kidal after the threat of losing his fingers drove him to Bamako the capital. Master Soumy believe in the power of rap music as an impartial instrument of change as he swings his sword of truth in his rhymes. Bassekou Kouyaté comes from a great respect for traditional, being a griot himself, and sees his sound as a living history of his people, stretch back into generation. For Fatoumata, her music is a reconciliation with her heritage, after leaving home as a teenager. Through this ambassadors, we are exposed to the rich heritage of the rhythms that sprout in the desert.

Indeed, history teaches us that the people of Mail have always been extraordinary musicians. Oumou Sangare, Ali Farka Toure, Salif Keita, Fatoumata Diawarra, Amadou & Mariam, Terakft and Tinariwen are all global music icons whose sounds are firmly rooted in traditional Malian music. Therefore, it’s quite bizarre that anyone would want to stifle a form of expression that is so natural and vital to the lives of the people. Yet as the film shows, the resistant this oppression is way more powerful and incendiary as the subjects of the film show. In each of the major concerts that the play at, thousands of people come out and response with a beautiful fervor that is extremely inspiring.

What Mali Blues achieves as a film is a vivid exposition of the musical landscape of Mali. By following each of the four subjects, the film, brings you the past and the present sounds in all its rich diversity. The film also very importantly highlights the active role music plays in daily life in Mali, mostly as a binding agent in social activities, like when Fatoumamta returns to her home town after years away, she is grated with a chorus of gleeful voice. When she aims to talk to them about a sensitive topic like female genital mutilation, it is song that break the ice and allows her to have a very intelligent and honest conversation with the women in her home. Indeed, it’s quite hard to ignore that music is the soul of the Mail and it will take more than the threat of violence to end it.

The cinematography of the film also does a good job of showing of the breath-taking landscape of Mali, acting as visual contrast/complement to the deeply emotive soundtrack. You get immersed into the beauty of the scenery and very quickly understand the importance of the resistance. The filmmakers also manage to strike a balance in the narrative as they do not limit their interaction to just the music, but balance it with views from Islamic leaders and present other key unspoken truth that reinforce the resistance. The only thing Mali Blues fails to reconcile is this political history of Mali in the film, as it fails to make reference to how music has often been a voice for challenge political power in the country as artists such as Oumou Sanger have done in the past with their own music. It would have been great to examine this through a contemporary lens and further appreciate the role of music in that society, beyond joy.

Mali Blues is a must-see for any hard-core African music head or anyone looking to enjoy the beautiful landscape of the country as it offers a great look at the musical and natural landscape of Mali whilst providing insights into the lives of the four subjects. For instance, it’s a great way to learn about the back stories behind Fatoumata Diawara’s many hits. Yet, the greatest win for this film is how it shows the power of culture, in the face of tough test. Mali will also be a nation of song, with voices ready to fight any form of oppression.